On Friday, April 17, the entire population of the Naimoli Athletic center at the New Jersey Institute of Technology (NJIT) took a vow to stand, dance, and be merry for 18 consecutive hours. The reason: For The Kids!

Dance marathons, which are student-run philanthropic events, have come to NJIT in the form of HighlanderThon, so named after the school’s mascot. The campus had its inaugural marathon over the weekend from April 17 at 4pm to the following day at 10am.

At the marathon, a staggering amount of activities were available to attendees and volunteers. Memorabilia from HighlanderThon could be purchased at a corner. Video game systems were present at the back. There was plenty of room for catch and other ball games to play. Of course, there was also dancing.

Throughout the 18 hours, the executive team of HighlanderThon held regular events. Every hour, all the attendees of the room performed a Hype Dance that helped to energize everyone during the later hours of the marathon. There was a rave segment, a traditional hispanic music segment, a Disney segment, and a segment that was dedicated to music from different decades of the 20th century.

HighlanderThon proved to be tremendously successful: for its inaugural year, the philanthropy raised $16,120.01. It shattered the previous NJ fundraising record for a first-year dance marathon by $4000.

The funds raised by the event will all go to the Children’s Miracle Network Hospitals, which is an international non-profit organization dedicated to helping children in need of medical support. The funds will be used to pay for whatever the hospitals need, including medicine, physical and emotional therapy, surgery, and so on. 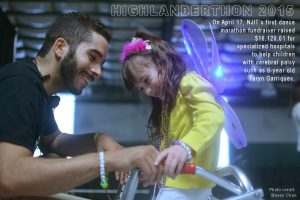 While the event had only just concluded its first session, Evan Tyerman, the Chairman of the organization, can’t wait for next year.

“Next year is going to be another record-breaking year. The whole Executive Team was restructured, and we have a brand new model to keep our committee members involved. I cannot wait to work with some of the returning Executive Team as well as many new faces. The only direction we can go from here is up. I want to take HighlanderThon to unimaginable heights next year. NJIT, you just wait.”

Previous PostBe You: On Coming Out and Accepting DifferencesNext PostNJIT Highlanders Get Rocked 4-0 by Manhattan Jaspers

Executive Editor of the NJIT Vector. A computer engineering student that loves writing, I took it to the newspaper.

How to Navigate NJIT Meeting Resources