Trump, Russia, and the White House: Thoughts from the NJIT Student Body?

Controversy rocked the Trump Presidency since before Donald Trump was even sworn in and political opinion in America has become even more polarized. A survey of 113 random NJIT students has revealed that our campus does not have faith in the Trump White House.

In June of 2015, Donald Trump announced his run for President of the United States, igniting the last three years of Trump’s political firestorm. Criticizing Democrats, Republicans, and the media, Trump drew controversy on his way to the presidency.

Since the July 2016 document leak from the Democratic National Committee, an FBI investigation into the credibility of the election began.

In March 2016, Trump’s foreign policy advisory council’s staffer, George Papadopoulos, met with Professor Joseph Mifsud in the United Kingdom to discuss potentially compromising information regarding the Clinton campaign. Papadopoulos would plead guilty in October 2017 to lying to federal officials during their investigation and received his sentencing this month, September 2018.

Along with frequent turnover and instability of various positions within the Trump Administration, legal issues plague the office. Apart from the Papadopoulos case, former Trump campaign chairman Paul Manafort pleaded guilty to tax and bank fraud this September, and Trump lawyer Michael Cohen pleaded guilty to a number of charges in August.

Cohen’s lawyer, Lanny Davis, tweeted “Donald Trump directed [Cohen] to commit a crime by making payments to two women for the principal purpose of influencing an election. If those payments were a crime for Michael Cohen, then why wouldn’t they be a crime for Donald Trump?”

Amid the controversy, President Trump maintains a 40.5% approval rating and 53.8% disapproval rating averaged amongst various polls. At NJIT, however, our poll reports that 61.9% of students do not have confidence in the president while only 19.5% do.

63.7% of students perceive the White House to be in disorder and 11.5% think that it is in trouble, while 18.6% perceive it to be working fine. 44.2% of students believe Trump’s aides’ corruption reflect his character, 36.3% think that this is potentially the case, and only 10.7% believe that the character of their president is untainted by his associates.

Lastly, despite an FBI report detailing Russian hacking and an indictment of twelve Russian agents, only 57.5% of students felt that there was most likely Russian interference in the 2016 election. The remaining 32.5% is split almost evenly between potential meddling, no meddling, and not informed enough.

The Trump presidency is at its halfway point and the Mueller investigation is proceeding with momentum. With the political environment as it is in America, it seems that fewer people can afford to be “not informed enough on the issue to form an opinion”. 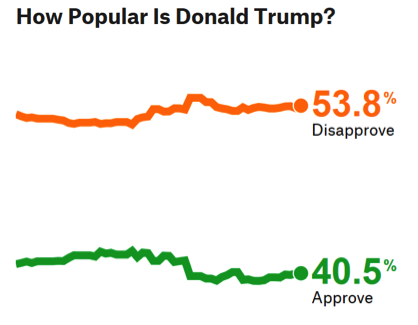 “Covid-Safe Behind Bars?” – New Jersey Prioritizing the Incarcerated for the COVID-19 Vaccine

My Hopes and Fears for President-elect Joe Biden’s Presidency