Behind the Veil: The Meaning of the Hijab

Take a stroll through campus; whether it be rain or shine, dry or humid, you will notice many Muslim women wearing headscarves of various colors and designs. This headscarf is called a hijab, an Arabic word that means “to cover, veil, or screen.”

To clarify, not every Muslim woman wears the hijab. But those who do say the headscarf frees them from sexual objectification and physical judgment.

“Wearing a hijab is more than just having a scarf on your head,” explains Rawan Attili, a freshman studying Biology at NJIT and a member of the Muslim Student Association. “By covering up your physical appearance, men are not attracted to you for your looks, but for your personality and character, and when you understand her for who she is and love her for that, the relationship is much stronger.”

The practice of wearing a headscarf comes from the Quran, which instructs women to start concealing their hair with the headscarf after puberty. 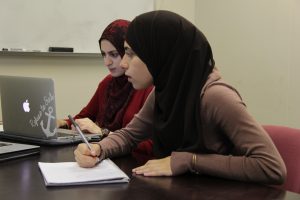 Studying at the math tutoring center are Rawan Attili (left) and her friend, Layan Abbassi (right), two of many women at NJIT who dress in hijab daily and are active members of NJIT’s Muslim Student Association.

“Look at how a clam shell protects a pearl, or how fruits have a peel which preserves the flesh and seeds,” says Dina Abdelhady, a sophomore who studies Biology at Rutgers-Newark and is a member of that university’s Muslim Student Association. “The concept of the hijab is more than a headscarf; it is meant to protect a woman and keep her modest.”

At NJIT, Muslim students represent a significant portion of the student population. The Muslim Student Association, an organization that includes 150-200 students from NJIT, Rutgers-Newark and Essex County College, hosts prayer session every Friday at 12:30 p.m. and 1:30 p.m. in room B38, in the basement of the Campus Center Atrium.

“Here, in America, I am very grateful for my freedom of religion and expression ever since I started wearing my hijab,’’ says sophomore Biology major and MSA sisterhood coordinator Miriam Abid.

Wearing clothing which represents a certain faith or ethnic background can require a great amount of dedication, pride, and sometimes courage.

‘’I am not afraid,’’ says Abid. “Especially at a school like NJIT, which has consistently ranked as one of the top schools for most campus diversity, no one has given me a tough time about wearing a hijab,” Abid said.

Still, they do have to deal with common misunderstandings. One is the belief that in Islam men are valued over women.

“Islam greatly values women, and as an honorable part of society, they must be treated as such,” says Abdelhady.

The association of Islam with terrorism is another frustration. All three say they condemn the sort of Muslim extremism that is manifested by groups like ISIS, the Islamic State in Iraq and Syria.

“I really wish more people would listen and learn about Islam, because believe it or not, Islam is the second largest religion in the world and it is continuing to grow at an enormous rate,’’ says Abdelhady. “The media really depicts Muslims in a negative light; it makes people associate hijabs and bearded men with terrorism, but people can just pick up the Quran and read a little about Islam and find that it is beautiful and teaches nothing but peace, love, and all that is good.”

For those who think there’s no style associated with the hijab, think again. Many Muslim women have showcased hijab fashion on Instagram, Pinterest, Tumblr, and many other social media outlets.

Is it difficult for Muslim women to find hijab-friendly clothing while living in a secular society like the United States?

Thanks to the recent fashion trends, no. “We used to have trouble finding modest clothing, but when maxi skirts and dresses came into style, it’s become a lot easier,” Attili says.

Buying hijabs is not difficult either. “. . . .many of the scarves sold in many mainstream stores can be worn as hijabs. If I want a hijab made with a more expensive material, I order them online from a Turkish store,’’ Abdelhady says.

Adds Fnu Saba, a sophomore IT major: “Hijab means a lot to me—it’s my beauty and my life, and this is how people recognize and respect me as a Muslim girl. It is my true identity,” she says.

Previous PostDeath on Campus Still Under University ReviewNext PostBe You: On Coming Out and Accepting Differences

How to Navigate NJIT Meeting Resources