Namco-Bandai is back with a return to the storied Dragon Ball universe. After a 3 year hiatus (ignoring the Kinect game and HD re-release) comes Battle of Z (360,PS3,Vita), a somewhat different take on the series that is sure to turn the heads of some longtime fans. Gone is the 1v1 fighting style of the previous Budokai or Tenkaichi, as this game is now an 8 player (4 on 4) battle royale across the lengthy DBZ story arcs. Is this the return to greatness you have been waiting for or is this a fight you would do well to sit out?

As briefly mentioned above, if you are a storied fan of these fighting games, you will be in for a surprise with it this time around. For starters, this game covers the story line of DBZ from the Saiyan Saga (Raditz) to the end of the latest movie, taking place after the Majin Buu saga (Battle of the Gods). There are about 70+ characters including all the fan favorites and some not so fan favorites (Frieza’s henchman, Saibamen, etc.). As the gameplay is focused on 4v4 battles, there are certain times during these missions when certain enemies would team up together in order to level the playing field, so if you are fairly new to the series be aware that many of these missions do not play out as they did in the manga/anime series.

Gameplay wise, if any of you have played DBZ: Legends for either the original Playstation or Sega Saturn, this is more or less an HD spiritual successor to that. It plays more as a ‘strategy’ fighter then typical brawler as the enemies you go against are very strong (as they were in the show) and you and your team of four will have some trouble taking them on. As there are only two real attack buttons (melee and ki blast) you will have to coordinate attacks, combos, and assist each other in order to get an upper hand in the battle. Likewise, there is much more to do in a battle then just pummel your opponent for a knockout. Certain characters like Goku excel at beating people up or fighting up close, while others, like Piccolo, are more ranged and can do more damage from afar. Other characters like Krillin can support by providing others with energy or running about the field and reviving others for another chance at winning. It is a welcome change of pace to have so much activity going on screen instead of just having 8 people beat each other up, as it rewards different styles of play and gives reason to pick the less powerful characters above the brawlers. 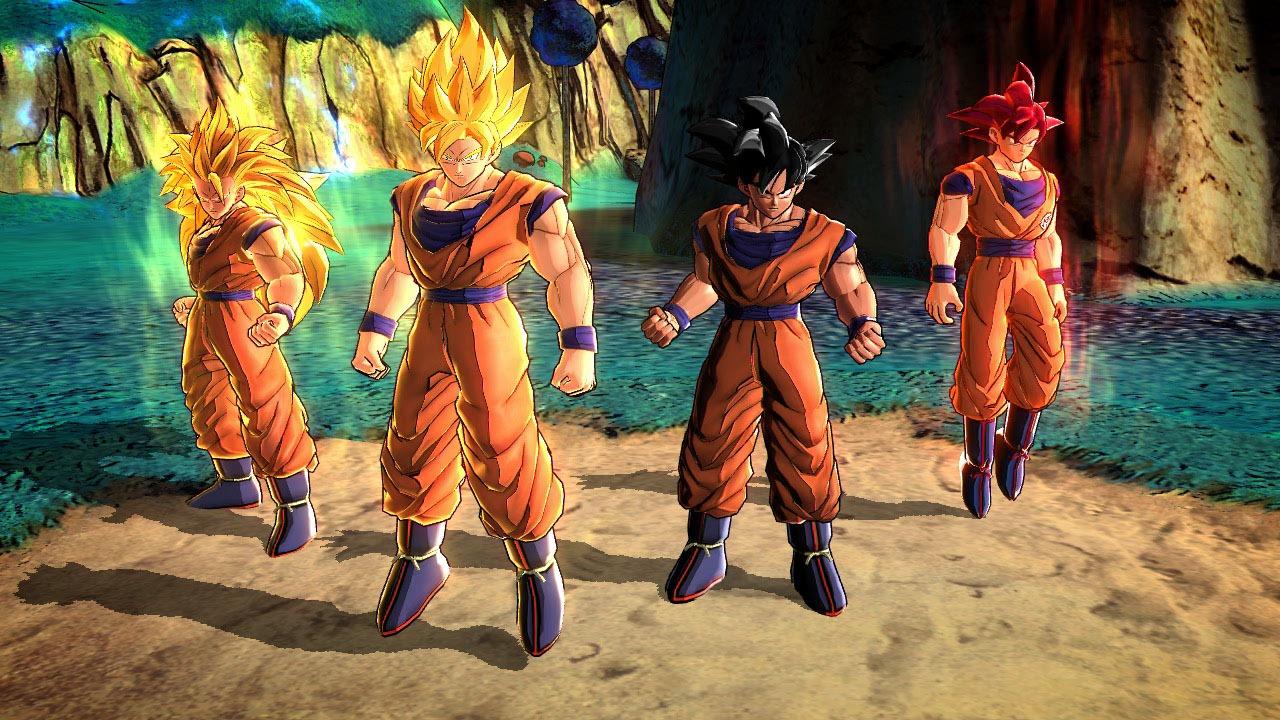 If this concept sounds interesting to you, then you will have a blast playing this game but if not, its only downhill from here. This game is criminally light on modes, with only story, co-op story, online play and an options mode to speak of. No training, no offline vs functionality at all, none of that. Not sure as to why they did not include this here, as not being able to play with friends on a couch beating up enemies as a makeshift team of characters leaves much to be desired. On top of that, I do not like that the character roster, although big in scope, is filled with a lot of padding. Each character takes up a certain slot in the roster, but since you can’t transform during battle, their powered up forms also take up another slot. What this means is instead of having characters like Hercule (Mr. Satan), Videl, or various villains from other movies, you have 5 Gokus, 5 Friezas, 4 Trunks, and so on.

Bottom Line: This was actually a tough game for me to come to terms with. While I personally enjoy what it offers – a unique story told through 60 missions, varied roster, and unique gameplay – I can understand why this would not appeal to many others. There is hardly any singleplayer content, there is no offline fighting, a lot of these characters are just the same person with gold hair, and the controls are simplified from the other games. If you have a Vita, I would still check it out, as it is more or less the same game, graphics and all, but with a $39.99 price tag. As for the console side, I would wait till either it goes on sale, or for the sequel which hopefully would improve on the shortcomings.

Next Review: The LEGO Movie Videogame