The theme of love conquering all forces of darkness and villainy reoccurs in the plotlines of many films, books, and TV shows. The highs and lows of characters in romantic relationships are so volatile that they cause the audience to ask questions such as, “Is this love real?” and, “What is this love anyway?”. In literature, emotions of love and romance are depicted through scenes of constant chatter, and other events which elicit consequences, further thickening plots of romance. There are many ways film producers express romance on the screen, such as showing each tear move down each lover’s face due to consequence, or the exposure of the moment when the character realizes where their heart belongs. It’s an art to make love appear realistic on the screen, and it involves major coordination between actors, directors, writers, set designers, and many other contributors to showcase romance.

Romance sometimes has a funny way of indicating its beginning or ending. Usually it begins with interpersonal contact; a moment when eyes meet, a sense of someone’s voice, or a sudden event that bursts the realms of the personal barrier. That moment on film is shown in an instant and to some viewers it seems predictable of where things will go, but that is where the setting and supporting characters intersect. Titanic (1997) worked this magic in its first few scenes with the main characters meeting each other, a jealous character attack, and the reenactment of an ending in the known conclusion that history states, but with DiCaprio drowning for the first time in his career. Film for many viewers proves one of the first ideas about love; it’s unpredictable. What’re the odds of two people who meet at a fancy dress party to suddenly commence a relationship, go through ups and downs, call it off, bring it back, get married, go through the parenting process, and meet each of their makers by their respective other?

After the first meeting, the remainder of a love story should show the chemistry of the couple in the romantic relationship. Actors/actresses take on this challenge by engaging in rapid/witty dialogue during scenes together—sometimes they are barely talking at all yet showing affection through action, and other times it seems both of the lovers hate each other’s guts so much that they deserve each other. In a respective order, Annie Hall (1977), The Princess Bride (1987), and When Harry Met Sally… (1989) sum up what chemistry means on screen. Sometimes the mixture can explode off-screen and sometimes off-camera like Mr. and Mrs. Smith (2005) which mostly worked due to the believability of the actor and actress. 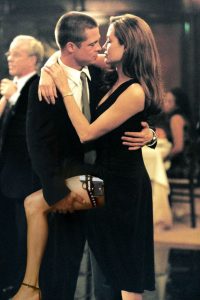 Romance or love exists in any genre. Love can be hacked by a horror film, beaten with pillows by a comedy, portrayed as “icky” in a family film, blown to bits in an action film, abducted by aliens in a sci-fi film, given a beat in a musical film, and relived as an old tale in a historical film. In film and life, love works in mysterious ways, whether it’s feeding on an unsuspecting couple, brewing up a situation on a stormy day, or allowing a chance of presence over absence. Love can be towards anything like Old Yeller (1957) or Lars and the Real Girl (2007), whether it’s kind love or in some cases emotional connections. What really matters is that when a holiday like Valentine’s Day arrives, you remember what matters most to you.

The Life and Filmography of Alejandro Jodorowsky