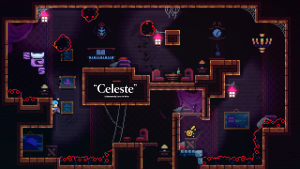 The challenge presented from ascending Celeste Mountain is not only physically draining, but mentally and emotionally for both Madeline, the main character, and the player.

Celeste was released on January 25, 2018, and is available across multiple gaming platforms. Initially developed by Noel Berry and Matt Thorson for a game jam, the two saw potential in their idea and decided to improve on the PICO-8 prototype.

Designed with the intention to test the player’s reflexes, grit, and interest in speedrunning, Celeste borrows inspiration from other two-dimensional platformers and mashes them up into a cohesive game that anyone can pick up and play regardless of skill.

As opposed to most games that bombard the player with an assortment of buttons to press, Celeste only requires three “action” buttons (aside from walking/running): jump, climb, and dash. From start to finish, the player’s ability to maneuver obstacles will rely on their understanding of each movement option and their ability flow from one to the other.

Instead of traversing through long levels similar to those used in the Super Mario Bros. games, Celeste splits those long levels into individual “rooms” for the player to enter and exit as they like. Upon entering each room a checkpoint is generated for the player to have unlimited chances to collect a strawberry – an in game collectable – or progress in the story.

Each chapter of the game introduces a new “theme” in the form of one to two new features to interact with. The player is forced to interact with the new feature that may affect their movement options all while escalating the difficulty the closer they get to the completing the chapter.

The games’ narrative focuses on Madeline’s understanding of herself as she ascends the treacherous mountain, holding on to nothing but doubts of her own ability. These doubts manifest themselves into a bizarre version of Madeline that tries to sway her from continuing up the mountain.

Celeste does a standout job of balancing difficulty for any player interested in the game. You can choose to play the game the way it is intended, or use the “Assist” mode if you feel unconfident in your platforming skills. With over 600 levels to play through, including secret areas, hidden “sides” for each chapter, and the ability to play the game jam prototype, there is an abundance of replayability.

No matter how difficult a room is, you can either skip it or die to it as many times as it takes for you to clear it in one fell swoop. At the end of each chapter, the game counts up every one of your deaths and while it seems like it may be a deterrent, it should be used to urge you forward as you proved you can make it through any obstacle in your way.

“This is it, Madeline. Just breathe. You can do this.”

Movies to Watch this Holiday Season

Hyrule Warriors: Age of Calamity – A Refreshing Ode to Lore

The Decline of Celebrity Culture During COVID-19