Word that a new athletic center will be built has been spreading throughout the student body with the release of renderings that were featured on nj.com last month. The project is still in its preliminary stages of development, but is highly anticipated by NJIT sports fans, student athletes, fitness connoisseurs, and faculty alike.

“Things may change because of how early in the process we are,” said Andrew P. Christ, the Vice President for Real Estate Development and Capital Operations. Despite the possibility of adjustments to the finalized plans, there are some features to the new facility that are certain.

A 3,500-seat event center, running track, natatorium, turf field, and 2 multipurpose gymnasiums make up the major components of this large provision. These features make up only 21 percent of the space allocated throughout the building. The rest of the building’s space will be put towards a wider range of usages, with 59 percent of the building will be designated as multi-purpose rooms, and the remaining amount will be assigned as circulation and support, or maintenance.

Renderings of the WEC interior show artistic depictions of upcoming facilities. They include a pool, a weight room with glimpses of multi-purpose areas, and a cardio area. 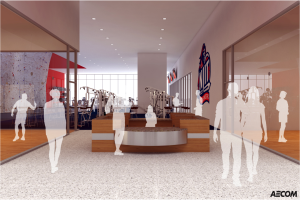 Christ emphasizes that the WEC will appeal to more than just those involved with the university’s athletic programs, and that the entire campus will benefit from its construction. The WEC’s spacious venues leave much for events such as convocation, conferences, and large-scale entertainment attractions to take advantage of. They are not limited to clubs and classrooms.

A prominent feature of the WEC is the large corridor that is designed to allow students to walk from Lock Street to face the Campus Center. This wide space, also informally known as the “spine” of the building, will be furnished with sofas and tables to give both commuting and residential students a lounge-like area with exposure to natural light to both socialize and study.

“Recreation is an important component to the overall college experience,” Christ said. “That is why we are excited to provide our students with a facility that they’ve never had before. This is going to change the NJIT campus for the better.”

The Lack of Proper Food Labeling at GDS: To Eat or Not to Eat?