State of the Senate 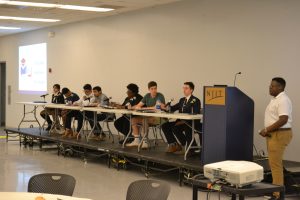 The Student Senate held their first annual State of the Senate address last Friday, April 13, that was open to all students and faculty of NJIT. Senate President, Mark Neubauer, and other cabinet members led the address.

The presentation was structured as: Student Senate accomplishments in the 2017-2018 academic year, the Senate’s future goals, as well as a public forum where students had the opportunity to discuss any concerns with the student representatives. In regards to this year’s accomplishments, Neubauer praised his team’s work in filling up a lot of vacant seats in the student government, increasing the number of participating Student-at-Larges in Senate’s various subcommittees, as well as improving their club management system.

As a result of the improved club management system, NJIT has seen 16 new clubs be officially recognized by Senate. Such clubs, such as the Brick City EHAAS and Sky Highlanders, will contribute to the diverse campus of NJIT. While the presentation addressed the significant growth in organized clubs, it also addressed improvements in Senate’s club funding to existing organizations. With the projection that the Single Events Budget will progressively increase to about $350,000 for the 2018-2019 school year, clubs will receive more money (as the single events budget is evenly divided amongst all organizations). New clubs will all receive a $1,000 probationary budget grant. Line budget hearings, which are opportunities for clubs to schedule all events and submit proposals for funds, are now occurring for the benefit of early organization and planning.

This Year’s Accomplishments for Senate In addition to securing office renovations for all club offices, the Academic Affairs Committee of Student Senate was successful in creating an adviser evaluation form that was not available to students prior, as well as establishing a 10 minute break between all classes—a considerable improvement from the previous 5 minute break. Meanwhile, the Student Affairs Committee has been working to fully integrate the Student Discount Program into everyday campus life: through the program, which launched March 23, 2018, NJIT students can enjoy a discount within the range of 5%-20% at 20 participating restaurants, which the Student Affairs Committee plans to expand to 50 participating locations.

The Open Education Resources (OER) is another at-work Senate initiative intended to improve the educational experience. Within this program, more learning materials and books will be made free and accessible to students via the NJIT Library website as an attempt to help combat the rising costs of higher education for all college students.

Many improvements to the school can be attributed to the Senate’s management of SAFRB and its drafting of proposals. The SAFRB budget had steadily increased throughout recent years, and will approximately reach $500,000 for the upcoming year. Senate has taken advantage of this by investing into the renovation of library study rooms, installing a volleyball court on the Honors Green, and moving the Senate office to the vacant space the NJIT bookstore previously held. SAFRB has previously overseen proposals to improve the quality of the NJIT experience by renovating/enhancing: both CC lounges in the basement and the fourth floor, the Warren Street Gym, and the Water Bottle Filling Stations.

Ashley Fitzsimmons, a fourth year Biomedical Engineering student, raised her concerns regarding the lack of an organized senior field trip that traditionally takes place during the summer following graduation. Fitzsimmons stated that Senior Class President, Manogna Guduru failed to plan a summer trip and that the senior trip was not budgeted for. Fitzsimmons then claimed that Neubauer was also in the senior class GroupMe chat but did not respond to the issue when it was posed in the group chat.

To this, Neubauer responded: “Sophia [Mufti, Vice President of Finance] can touch more upon that, but most of the money that is not being used is reallocated in the single events budget, which is the money that goes to all the clubs and organizations on campus.”

He continued: “And you are correct, any money that is not used rolls over to the next year so that more money will be available to the student class trip next year.”

“Of course this is not a huge issue, but it just seems like everyone we talk to on Senate has come back with no update on it,” Fitzsimmons stated, when she was approached for further comment. “ We have [also] contacted the senior class president about it many times. After I spoke about it at the State of Senate, various senators came up to me willing to get it planned and Christina Pascucci [Associate Director of the Office of Student Life] reached out to me as well.”

“In terms of the State of Senate in general, I think it is a great concept and something they should have at least once a semester to keep students updated on what Senate is doing. I learned a lot.” -Ashley Fitzsimmons, fourth year Biomedical Engineering major

“The Student Senate works hard to represent students. Despite all of Senate’s successes this year, we had an incredibly small attendance at the State of the Senate event. Personally, I think this stems from the fact that we haven’t been able to communicate well with the student body, and that students don’t feel like they have much of a stake in what Senate is doing. Moving forward I think it will be important that we increase our transparency, and make sure that we convey to students why we do what we do.” -Jeremy Bedient, first year Industrial Engineering major, Senate Freshman Representative

“Being a part of the NJIT Student Senate was one of the most positive and best experiences of my college career. From the five minute resolution to the NJIT Discount Program to the Smoke-Free Campaign, NJIT Student Senate has been making a lot of positive changes to campus. I unfortunately had to resign from my position in order to focus more on my grades, especially as I am approaching my senior year. I received nothing but support from the Senate when making this decision.” -Anna Baronos, third-year Biology major, former Senate Public Relations Manager

Testing and Tracking: Virus Detected in Wastewater in Cypress Hall

Digital Discourse in a Time of COVID-19