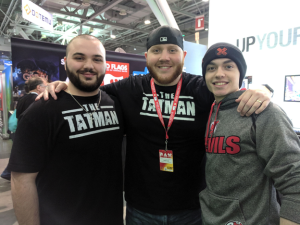 From Thursday, April 5 to Sunday, April 8, tens of thousands of gamers and cosplayers flocked to Boston to attend PAX East. PAX, originally known as Penny Arcade Expo, boasts hundreds of booths where vendors of all sizes can display their products and games.  In addition to the displays, there are also various presentations that visitors may attend.  PAX East is also sure to bring out plenty of celebrities in the gaming/cosplaying community.  This year one of the celebrities was TimTheTatman, a video game streamer who boasts 1.6 million followers and 74 million views on Twitch, a website where users can livestream themselves playing video games. A recent addition allows people to broadcast themselves doing everyday tasks in the “IRL” section. Those who wish to watch others play video games almost always look at Twitch.

NJIT’s own Thomas Sousa streams on twitch @Nikiski.  Sousa considers TimTheTatman as the “guy who got me [sic] into streaming” and was able to meet him at PAX East.  Sousa said he “dabbled into streaming” during high school but began seriously streaming at the start of July of this past summer. He made it a goal to stream at least 8 hours a day, and occasionally streamed for 24 straight hours. On average, Sousa would stream 350-400 hours per month during the Summer. His streaming schedule has slowed down since he has returned to NJIT in the fall.

Sousa started out streaming shooters like Counter-Strike: Global Offensive and Player’s Unknown Battlegrounds, but has now moved on to playing Fortnite.  With hours of refining his skill at Fortnite, Sousa has become absolutely dominant at the game. This season, he has an 8.5 kill/death ratio while winning 34% of his games. Perhaps most impressively, he has won 99 of 279 solo matches, which is well above the expected value of 2.79 wins. On top of this, his channel has amassed over 5,200 followers and nearly 20,000 total views.

Currently, Sousa is on the Fortnite squad for Unnamed Gaming, a semi-pro e-sports team.  At PAX, he was able to meet the manufacturer of Unnamed Gaming’s jerseys. Sousa still streams, albeit less often than during the summer. One thing he has learned over his time streaming is the value of presentation. He has invested in a high-quality microphone, webcam and graphic design to make his stream appear as professional as possible.

For the future, Sousa plans to further “develop [his] social media a little more” because he believes that, “social media is big for marketing anything online.” He can be found at @Nikiski24 for both Instagram and Twitter, and streaming Fortnite on the weekends at twitch.tv/nikiski

Previous Post20 Minutes with Leon CristoNext PostState of the Senate

Movies to Watch this Holiday Season

Hyrule Warriors: Age of Calamity – A Refreshing Ode to Lore

The Decline of Celebrity Culture During COVID-19