The construction and opening of the Wellness and Events Center has been met with mixed reviews that range from optimism to disappointment; students are appreciative of the new facility, but also weary of certain features that do not live up to its promises.

Last month, NJIT held a ribbon-cutting ceremony to welcome its new Wellness and Events Center (WEC), an investment worth $110 million and a commitment to enhance NJIT campus. The WEC provides opportunities to upgrade Division 1 athletic program reputations, overall fitness for the student body, and overall aesthetics of NJIT.

The 220,000 square-foot facility is accessible only to student athletes this Fall semester, while other students and faculty alike will be able to use the building and its resources by the Spring 2018 semester. Besides housing a new basketball stadium, the WEC will also provide a new eight-lane pool, a 5,710-square foot fitness center, and a conference center among other features.

In the initial construction plans, the center was supposed to have a sleeker and more spacious design. Furthermore, the women’s and men’s fencing teams have a combined locker room and are currently facing issues in accessing it. In addition, due to the abundance of glass, the WEC gym will not offer any free weights.

There are students who have voiced their disappointment regarding the renovation of the Warren Street gym into a place primarily for free weight equipment.

“We’re going to have old equipment to use. If I’m paying to use the gym, I should be able to have the proper equipment at my disposal,” stated Javier Santiago, a third year Mechanical Engineering major.

Even some athletes have been disappointed by the WEC—first year Information Technology student and fencer Olivia Adams stated, “I’m really excited for my team to move [into the WEC] and start using our new space. I wish it was finished sooner so that we could have been using the new space. Having our own space will make teams take us more seriously and help us grow as a Division 1 team…I know they have a lot of work to do on the WEC and I hope it gets done soon so we can all use it as a school.”

On the other hand, many students have felt that the WEC has exceeded their expectations. “Since I’ve started school here in Fall 2015, [it is nice] to know that there has been such a huge change to the campus,” said Manogna Guduru, a fourth year Biology student and Senior Class President. “The WEC certainly offers the campus the opportunity for new programming and creates a better sense of school spirit for athletics.”

Renee Collins, a fourth-year industrial design major, expressed her disappointment in the WEC’s ability to fulfill the needs of individuals aside from student athletes. She argues that in lieu of including “wellness” in the title of a building, the facilities offered within it should promote holistic wellness. Many believe the WEC should include CCAPS and other health services to encourage both physical and mental wellness in one place.

“In its current standing the WEC is an athletic center with the ability to host a concert. While it may be too late to reverse the tragedy of no on-campus doctor, CCAPS should be relocated to the WEC. Mental and physical health go hand in hand, so their presence should be tied to the building. The WEC has the potential to be a health hub at the heart of our stressful campus, but it will not achieve that until it renders itself capable to support the needs of its entire student body,” says Collins.

To address aesthetic concerns regarding the WEC and Tiernan Alley, Student Senate and the Student Activities Fund Review Board (SAFRB) are open to draft any proposals that will improve the facility’s conditions. SAFRB is a fund that consists of leftover student activity money, and contributes to investments if the proposal being considered is: 1) for a one-time purpose; 2) a benefit for all undergraduate students; and 3) a project the school is not willing to purchase.

“Think of SAFRB as change that you just received from a purchase that you didn’t put in your pocket,” explained fourth year, Michael Tadros, a Law, Technology, and Culture major. Part of this saved change is being arranged by the Student Affairs Committee of the Student Senate to add more seating outside of the WEC as well as putting up flags or monuments that represent each NJIT college, according to the Student Affairs Chairwoman Yasmine Elfarra, a senior Biology major. 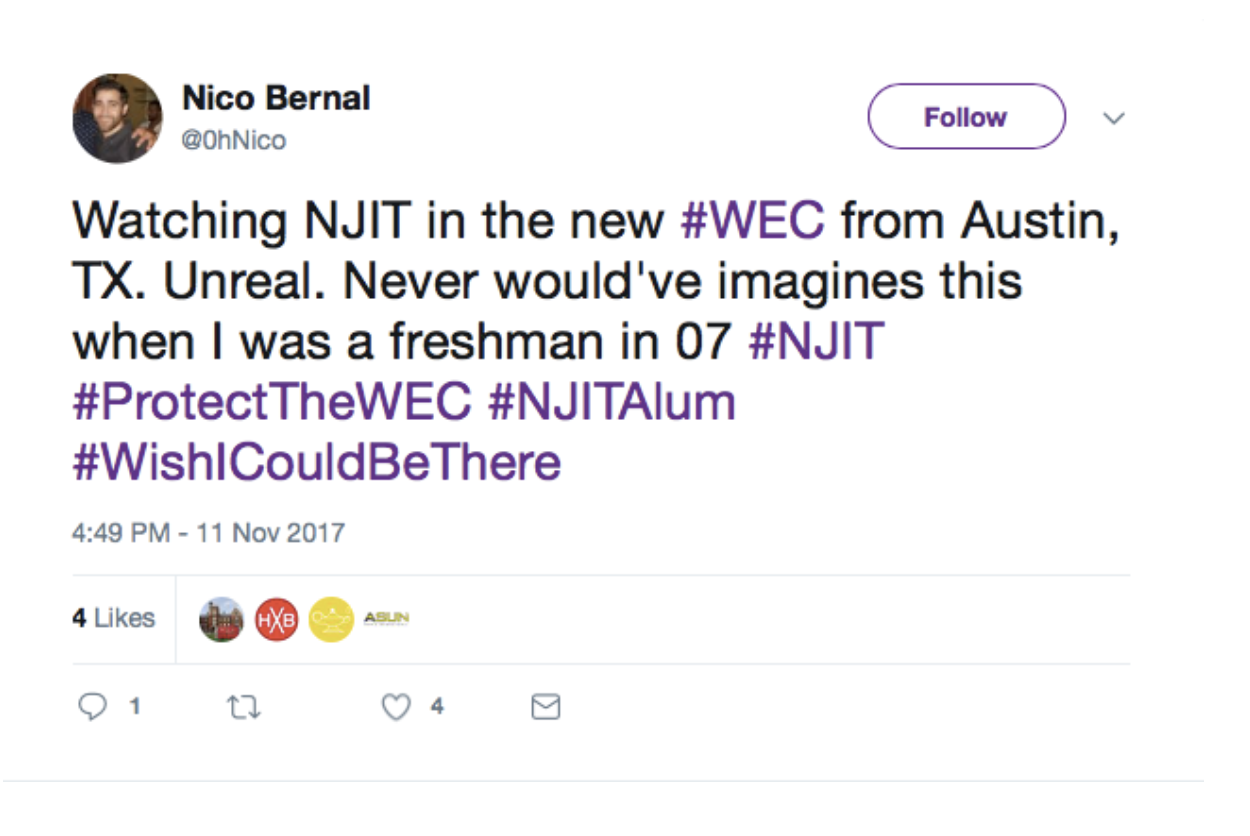 “The WEC is a facility that NJIT should most definitely be proud of, since it is a visual representation of our strong athletics program and strong school culture.” -Zenit Winfield, a first year Biophysics major.

“I think the WEC is a really incredible facility that has the potential to make a large impact on our campus. I’m looking forward to seeing large scale events in the WEC like concerts and conferences that weren’t previously possible with our old facilities.” -Jeremy Bedient, a first year Industrial Engineering major.

“The stadium really felt like an actual collegiate stadium as opposed to a large high school gym. It was fun to be in the student section because we were all extremely hyped up.” -John Town, a first year Civil Engineering major.

“I absolutely do not approve of the gym. We’re going to have old equipment to use. The old equipment that is being moved [to Warren Street gym] is falling apart. It should have been a priority to get new equipment. Not having free weights and squat racks is an inconvenience. If I’m paying to use the gym, I should be able to have the equipment at my disposal.” -Javier Santiago, a third year Mechanical Engineering major.

“Since I’ve started school here in Fall 2015, [it’s nice] to know that there has been such a huge change to the campus,” said Manogna Guduru, a fourth year Biology student and Senior Class President. “The WEC certainly offers the campus the opportunity for new programming and creates a better sense of school spirit for athletics.”

“The gym is made for spaghetti-armed children. Regarding the Honors gym, I’m fine with having access to free weights, but I don’t want to be excluded from those whose fitness routines are being tailored to by the WEC.” Lyndon Laxina, a fourth year Electrical Engineering major.

The Lack of Proper Food Labeling at GDS: To Eat or Not to Eat?