Despite issues with bullying and bots, Twitter, an online platform where registered users can post and reply to one another via messages— “tweets”—has done well since being founded in 2006 and is now a primary medium for news distribution and social interaction/networking. Whereas users were previously, users were restricted 140 characters for their tweets, on Tuesday November 7, 2017, Twitter increased the limit to 280 characters for all languages except Chinese, Japanese and Korean.

Yet a frequent complaint by users of the service was that the character limit was too low. Analysts dug into user data, and found the only languages in which users did not face difficulties with the character limit were Korean, Japanese, and Chinese, likely due to the density and structure of those languages. Aliza Rosen, product manager at Twitter, addressed the change in a blog post, writing that “Historically, 9% of Tweets in English hit the character limit.

This reflects the challenge of fitting a thought into a Tweet, often resulting in lots of time spent editing and even at times abandoning Tweets before sending. With the expanded character count, this problem was massively reduced – that number dropped to only 1% of Tweets running up against the limit. Since we saw Tweets hit the character limit less often, we believe people spent less time editing their Tweets in the composer. This shows that more space makes it easier for people to fit thoughts in a Tweet, so they could say what they want to say, and send Tweets faster than before. You can see this happening in the graph below.” 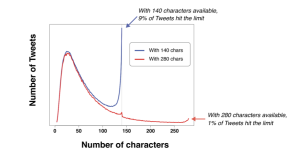 According to Eddie Lorenzo, a freshman Architecture major, “tweets are meant to be short sentences or phrases, that’s what Twitter is all about. I feel like it defeats the purpose, at that point it’s just Facebook.” Nikhil Kanoor, a junior Human Computer Interaction major, simply said, “I don’t use Twitter so it doesn’t matter to me.”

Previous PostStudent Senate Update: 11/14Next PostWhy I Chose NJIT and Why I Chose To Stay