Excelsior! (Always wanted to say that)

I know, I know, another Lego title. Seems just like yesterday when the Lego games came out and were a neat and innovative take on the platforming genre. After years of Star Wars, Indiana Jones, Harry Potter and DC games, the formula has begun to lose a little bit of its luster. To answer the call, Tell Tale studio is back at it again, this time with Marvel and its huge roster of storied heroes and villains. After playing the game a little bit I am definitely impressed by what’s under the hood, as it successfully shows that the Lego games are a force to be reckoned with.

Trying to explain the story of Lego Marvel Superheroes (Xbox/PS3/PC/Vita/3DS) is a bit of a doozy, as it expands well across the Marvel universe. For starters, Galactus (the big, purple, planet-eating space being) has sent out his herald, the Silver Surfer, to look for another planet to feast. Of course, that leads the surfer to our earth where, after an attack by Dr. Doom, he is incapacitated and his board is broken into its component pieces, called cosmic bricks. The villains, led by Loki and Doom, then begin to collect pieces of the board to create “Dr. Doom’s Doom Ray of Doom” (wish I was making that up) in order for Doom to build a death ray to defeat Galactus and rule over the world. Meanwhile, Nick Fury, leader of Shield, calls upon the heroes to help defeat the villains, stop Doom and somehow find a way to save the world from its imminent destruction.

As heavy as the story sounds, it’s actually given as bite size chunks in the perception of the current hero you are playing as. The story follows a linear path at first, where you play as some character or groups of characters and progress through some portions of a stage chasing after a villain. A little through that progression, you may either split up or team up with a new person altogether to chase down said villain or some other menace. Case in point, at the beginning of the game you play as Iron man and Hulk, taking on Sandman and Abomination as they take over NYC. Halfway through the level Spiderman zips into action and gives you a hand as you take down the duo, before another villain wreaks havoc, wherein you play as Spiderman, Mr. Fantastic and Captain America. 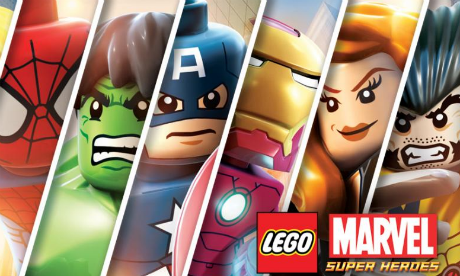 Now for those of you who played a few of the other Lego games, prepare to breathe a sigh of relief because this game takes the Lego Batman 2 approach of level design by opening up all of the world to you. Anytime during the campaign, you can exit to Manhattan and fly, jump, web-sling or walk (sorry Hawkeye) around to see the scenes from the Avengers movie, look for hidden collectables or just enjoy the scenery. I greatly enjoyed this aspect of the game, arguably more than the game itself. Traversing NYC as a Lego Spider-man, flinging web-lines into the air and jumping from building to building, was as much a blast as it was dashing through the air as Iron-Man. It provides for more fun than you would imagine, especially considering how fluid all this looks despite the fact that they are walking Lego pieces.

However, I had a couple of issues with this game that really did dampen the overall experience for me. For starters, there are way too many characters. Not including the DLC people, that’s 155. One hundred and fifty-five. Normally that would be awesome, but seeing as most fall into the archetype of heavy brawler, magic person, smart person, or average person, it makes that number rather small. Granted, once you beat a level you can play it in free play mode, where you can switch to any character you unlocked, but it provides little incentive to switch to people you do not know or care for unless you are an avid fan. On top of that, the combat is still the same one-button mash combat as in the other titles. Now, I do love how now you get ‘cinematic-esque’ cutscenes during battle, involving little button prompts ala God of War, and that when fighting small enemies near death your character will dispatch them in a unique way (like Spider-man throwing them with webs or the Hulk slamming them around). Nevertheless, enemies only drop hearts (health) which you won’t need because if you are going to die (keeping in mind you have unlimited lives) you can just switch characters the other character and avoid the death all together. It makes combat more repetitive than fun.

Bottom Line: This game is great to play in spurts. It’s easy to pick up, you don’t need to be a die-hard Marvel fan, it doesn’t take itself seriously, and aside from some gut punching lame jokes, is rather funny. But you have played this game before and many times before at that. Even for $50, I can’t tell you with a straight face to pick this up. If you have a 3DS or Vita I want to tell you to pick up the handheld version, as these issues could be swept away due to having a portable console experience. Those versions, however, loses the open world aspect and have graphics that are nothing to write home about. I would either give this a rental or wait for a drop in price before jumping into this Lego world.