The future is here, and it is not chrome, but black! After 7 years of HD gaming, introducing Blu-ray as a mainstay gaming feature, and the advent of the PlayStation Network comes the PS4, and it is one sexy piece of kit. Coming in at 6.17 lbs, it is noticeably lighter than the PS3’s 11 lb initial weight, which is quite amazing once you see what exactly lies under the hood. Boasting an impressive array of power, tech and future proof design, the PS4 aims at being the #1 entertainment device in the household, all for $399. But the question stands: is it the best console for your household?

Now Sony came into the current gen (E3 2006) with their head so high in the clouds that they felt they could not fail. As such, when they were creating the PS3, they went for making something so cutting edge that people would feel the need to buy it. However, at a $599 price point it was out of a lot of people’s hands and the year release after the Xbox 360 did not help it. Steadily over the years, they have done much to address their hubris and it shows through and through with this console. Make no mistakes, the PS4 is without a doubt the most robust and powerful gaming device ever made. With GDDR5 ram, a custom AMD Radeon™ GPU capable of 1.84 TFlops and internal Bluetooth ®, Wi-Fi and a 500 GB hard drive, this console made sure to stay relevant for the foreseeable future. The best part about all of this techno mumbo jumbo is that Sony has again taken prior mistakes to heart when designing this system. All the touted features are what the developers of games need to make great experiences on the platform and to ensure that the consumer gets the best experience while playing them. By targeting developers and consumers instead of hoping that people buy what they deem necessary, they focus only on what’s important and keep the cost down, ensuring that not just the super-rich can get their hands on the next gen.

As mentioned before, the PS4 holds a lot of power despite its size. Looking almost like a closed laptop when laid down, had I have not seen it for myself I might have thought it to be another PS3 revision. It’s sleek, with a bold design and touch panel interface that fits perfectly in any entertainment setup. I dare say I was not a fan of how slim everything was, making it a bit hard to find out where to insert game disks, but that is a negligible problem.

In addition to the new outlook on developer/consumer focusing, Sony has also taken then liberty of applying this logic to the controller as well. I am a huge fan of the PlayStation controllers. They just make sense to me, fit well in my hands, and have been around since I was a child. That said, the controller was developed in the late 90’s and after over a decade of industry innovation, the controller was long overdue for a revamp. To answer that call enters the Dualshock 4. What I love about this controller is that it is largely the same great controller I grew up with, but now with an added touchpad in the middle, revamped L2/R2 triggers (for better grips in shooters and pedal controls in racing games), revamped analog sticks, integrated speaker (so games can talk to you like on the Wii) and a new share button.

While the touchpad is self-explanatory, it is nice in that games like Assassin’s Creed 4 that have large maps and the like, you can utilize the touch pad to scroll over the map much as you would with a mouse for quicker navigation. Likewise the touch pad can be pressed down like a button, so in games like FIFA, for instance, I press down on the touchpad to switch seamlessly from playing on the field to playing as the keeper with my teammates being controlled by the AI.

The analog sticks are nothing crazy, but they do feel better in your hands and seem less like to flip out of your fingers given the circle ridge embedded in each nub. They are each also spaced apart a few inches more then on the current DS3, giving more space for your fingers and allow people with bigger hands to enjoy it. Lastly, the share button is a great new feature and frankly a game changer for me. The PS4 automatically records up to the last 15 minutes of every single thing you do in game, including voice chat. Once you press the share button, it pauses your game and brings up an interface that allows you to edit your video (or screenshot) on the fly and upload it to Facebook, Twitter, Ustream and Twitch for the world to see. Likewise, you can even stream your live gameplay sessions to any of the sites mentioned with the same button and if you have a PS4 camera attached, you can provide video commentary, just like in your favorite Let’s Play YouTube videos. Also, camera or not, voice chat and group chat is now finally a part of the PlayStation experience. You can either send voice messages (headset included in box!) to friends or host parties of 8 players while discussing anything over your game!

Rounding out the newer more impressive features of the PS4 are the subtle improvements to the PS3 XMB. Now just called the dashboard, it is bigger and more intuitive then the PS3’s main menu. Although I was a fan of the PS3 XMB, it did have far too many menu options for things like audio and backgrounds and such. Now the screen is broken into two menus: media and non-media. The media section is where all your games. Movies and the like are stored and instantly playable while the other menu holds your notifications, the PSN store, your friends list and the options menu, among others. Since the clutter is gone, navigation is fairly fast and soon you will find yourself pausing games, pressing the home button on your controller to answer emails and popping back into the game without missing a beat. 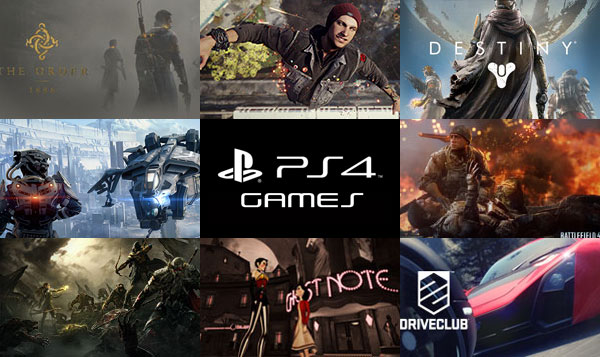 Needless to say, the games look amazing. As of now, the main killer app is Killzone: Shadow Fall and it is a sight to behold. Running at a smooth 1080p it really does at times look like a digital movie trailer until you remember that you have a controller in your hand. It’s that stunning. Likewise, even current console iterations of games like Assassin’s Creed 4 have night and day differences on the two consoles. For instance, on the PS4 the foliage is more luscious and sways with the wind. To add to this, when it rains, you can now see individual drops of water fall from the sky onto the deck of your pirate ship. Now, it may not sound like much to you now, but rest assured, it provides full immersion as everything seems more believable to the point that you do notice much because it seems natural, just like in real life. Gone are the days of playing sports titles and seeing cardboard fans, as they are now fully rendered 3D models. Scoring a goal or making that buzzer beater pumps you up as you can see the fans wave in the stands and cheer. The new processing power is definitely up to snuff in this regard and makes for one heck of a show.

It is a bit early for me to go about saying this is the best thing on the planet, as it has only been out for a few days and there are not many games yet to play on the system. To that end, the PS4 is kind of lacking. While it is a great gaming console with impressive graphics and social aspects, it does not do much else outside of that. Now just like with the PS3, I am sure that with coming firmware updates they will definitely further improve functionality as time goes on.

As scores are all the rage now and these consoles are different from normal game reviews, I will rate both the Xbox One and PS4 to give you all a greater understanding of my feel for the console. I give the PS4 a solid 8/10 because it is a very powerful machine, easy to program for and cheap. However, it doesn’t really (as of this review) offer much now that the PS3 doesn’t aside from higher resolution graphics and an improved controller. Although you can use the Vita as a second screen to game any of your PS4 games over Wi-Fi on, that is not an inherent function of the device. You have to buy the Vita separately, and even then it is still solely gaming based. And while I am sure that in the coming months after launch I will be glad I have my system, right now I am still waiting for that moment. Even still, with record sales, a cheaper platform and a week’s head start, the PS4 is bringing the fight to Microsoft, and I can’t wait to see how the Xbox One answers.